CELEBRATING THE BEST OF THE BEST

How do you celebrate the best qualities in others?

Not just in your personal relationships. How do you celebrate the best of the best within your business or non-profit organization? And why is it so important?

Clarifying core values is a worthwhile exercise for us all. Perhaps you’ve done this personally. (I hope so!) What about where you work or serve? Are the core values readily apparent? If you’re in a leadership position, are you intentional about honoring those team members who most beautifully and consistently reflect those values?

Few companies do this better than Delta Airlines. For the last 25 years, Delta has honored their “best of the best” with membership in their coveted Chairman’s Club. On an annual basis, 100 Delta employees are selected for this great honor.

I first learned about Delta’s Chairman’s Club several years ago on Facebook. A beautiful friend whom I had known for many years through our church had been selected by Delta for this prestigious honor. I knew Kaki Henderson as a humble, kind and joyful person, but I had never interacted with in her in a business setting.

Being passionate about the importance of affirmation, I was DELIGHTED to see how Delta had honored Kaki. And I’ve wanted to share this example in hopes of inspiring others to creatively honor the “best of the best” where you work or serve.

This framed photograph, given to Kaki, was one small part of her recognition. The adjectives on the picture were taken from the nominations submitted by her peers and coworkers: “SENSITIVE, HUMBLE, INTEGRITY, GENTLE, APPROACHABLE, ENCOURAGING, PATIENT, COMPASSIONATE, PROFESSIONAL.” Wonderful, affirming words.

Here are a few more details about Delta’s Chairman Club:

-Delta has over 70,000 employees in 60 countries. Peer nominations from across the organization are solicited annually. Typically about 6,000-13,000 nominations are received for the 100 awards. Even being nominated is considered a great honor by employees.

-Behind the scenes interviews with co-workers are done for each nomination.

-Selections are made by Delta organizational leaders and previous Chairman’s Club inductees.

-Each August, recipients are notified in a very celebratory way. At the time of her selection, Kaki was teaching in Delta’s In-Flight Service training program. As part of her class’ graduation ceremony, Kaki was called up to the front of the room. A cake and balloons appeared. Her family had been flown in as a part of this surprise. Several close friends were also in attendance. The letter of nomination was read and a leader from her organization spoke about Kaki. Her sterling character and embodiment of Delta’s values was publicly affirmed and celebrated.

-Each November, a gala is held for all of the Chairman’s Club recipients at the Delta Flight Museum.. The recipients and their escort stay at a 5-star hotel and receive treatment and gifts appropriate for A-list celebrities. Previous Chairman’s Club recipients welcome them to the hotel with cheers and champagne. As the inductees arrive for the Gala, they walk down a Hollywood style red-carpet, again to the cheers of ecstatic co-workers, family and friends. 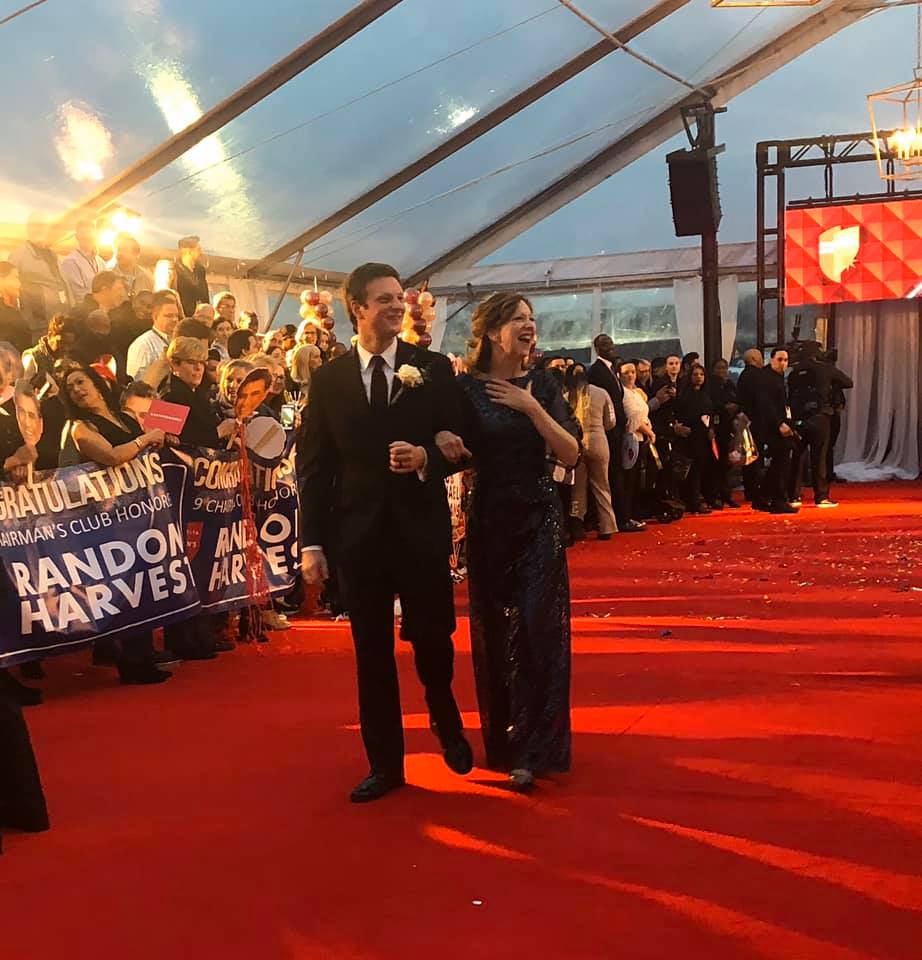 -At the gala, a magical and festive evening of dinner and dancing, each inductee is called up on stage and recognized by Delta’s President and CEO. Photographs are taken. Inductees are given a personalized remembrance of the reasons for their recognition. In the year Kaki was inducted (2019), each honoree received a photograph similar to the one displayed above, highlighting their unique and outstanding qualities.

-Throughout the coming year, this honor continues to be publicized by a plaque and photograph of each Chairman’s Club inductee at the boarding door of one of 100 Delta planes. The employee has a special Chairman’s Club lanyard to wear throughout the year. Their photograph is displayed in the lobby of the Delta Headquarters. After that year, it is on display in the Delta Flight Museum.

-Gifts to Chairman’s Club inductees include two seats anywhere Delta flies, a top quality suitcase and a Chairman’s Club pin which can be worn throughout their Delta career.

-Delta CEO Ed Bastian refers to the Chairman’s Club inductees as the “giants of the corporation,” reflective of “their service, dedication and all-around embodiment of ‘the spirit of Delta.’”

Delta consistently reinforces and celebrates the core values they say are most important. It’s no coincidence that they are consistently recognized for their excellent customer service. In fact, in 2021 Delta was ranked highest in Customer Satisfaction by J. D. Powers.

I hope you will be inspired by Kaki and by Delta's example of consistent and meaningful affirmation in the workplace. If you are in a position of leadership, I encourage you to be creative and reinforce your organization's core values. Perhaps your workplace is small and your budget is limited. There are still many ways to creatively affirm your employees who are role models. Do it publicly. Do it boldly. Do it consistently. It's the ultimate win-win: great for employee morale and a great way for your "walk to match your talk" as an employer.

The best of the best deserve to be celebrated at home and at work. Not just for what they “do,” but also for who they “are.”

One special request for my friend, Kaki: This wonderful gal is currently battling cancer. If you are a person of faith, please pray for Kaki.

"The earnest prayer of a righteous person has great power and produces wonderful results." James 5:16 NLT