Are wedding bells ringing in your future? Perhaps you’re getting married soon, or you are the mother or father of the bride or groom.

If so, it’s the perfect time for letter writing.
A lovely wedding tradition is for the bride and groom to write each other letters that are read shortly before the wedding. What an appropriate time to express deep and abiding love for one's future mate and to celebrate the qualities of the betrothed that are cherished. A letter also provides a perfect way to share hopes and dreams for the future. It’s intimate, personal, and lasting. 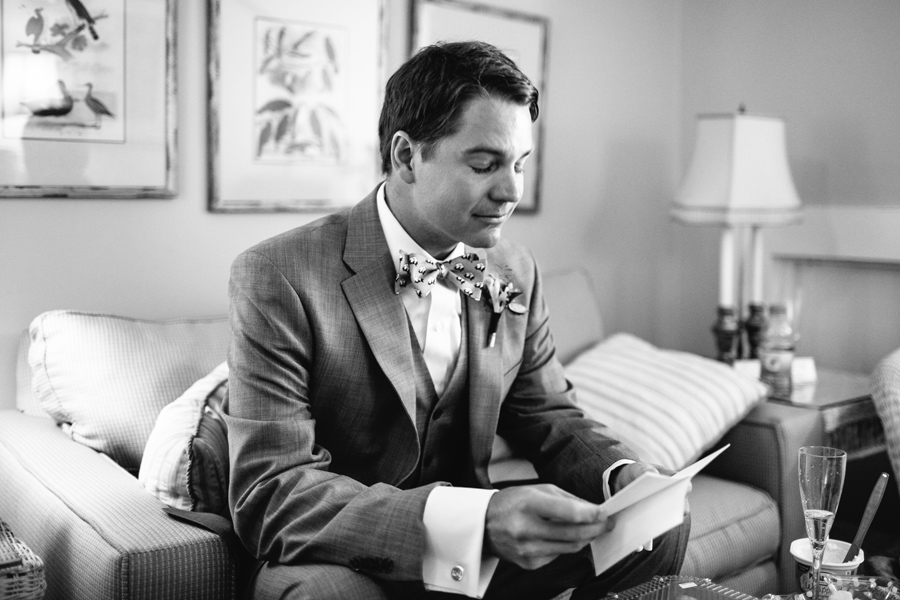 Photo credits: Carolina Photosmith
And in the years to come, having the ability to read and reread that letter, especially when the waters of life get choppy, is invaluable. As the saying goes, “Memories fade, ink lasts.”

A wedding also provides an opportune time for letters between the parents and the bride and groom. A new season of life is beginning for the couple getting married, but it’s also a change in seasons for the parents. The main job of parenting is completed.

A letter from the bride and groom to each parent expressing gratitude and affirmation for how they lived out their role as mother or father.

Hopefully, the parents are thrilled about their child’s happiness, but there is inevitably a sense of loss, too.  The parent-child relationship will never be quite the same.  It’s time for the child to “leave and cleave.”

What a treasure for a mother to have a note from her son, affirming who she has been as a mother. As happy as she is about her son’s marriage, she might feel a twinge of sadness that she’s no longer the most important woman in her son’s life. Knowing that her son values her character and her countless sacrifices is a priceless gift.

A letter from a mother or father to their child as a written blessing. Perhaps you’ve never expressed affirmation to your child in writing. It’s the perfect time. As your son or daughter now becomes a husband or wife, tell them what it’s meant to you to have been entrusted with the role of being their parent. Share the character qualities about your child that you think are so special, and how those qualities will serve them well as a husband or wife. Tell them your prayers for their marriage. Offer your best piece of marriage advice.

Perhaps your child won’t give you immediate feedback that the letter was meaningful. (After all, they’re about to get married.)  But having your letter as they make this most important commitment will provide a touchstone they can refer to in the years to come.

Her daughter-in-law later reflected on the wonderful impact of that letter:
“It was the most special surprise when Vicki told me she had written me a letter and was going to read it at our rehearsal dinner. Usually parents put a lot of focus on their own child in the midst of wedding planning and getting ready for that big moment, but Vicki chose to take time to focus on me. The letter she wrote me was beautiful and is something I will treasure forever. She gave me the best gift anyone could give and that was love and faith in me as a wife to her son. She gave me encouragement in Stephen and my life together and the reminder to put God first. I felt so loved while listening to her read the letter to me and it made our relationship stronger.”

Writing loving and affirming words comes easier for some than others. If you need help, please get a copy of  Leave Nothing Unsaid. The workbook provides a step-by-step guide for writing a meaningful letter. As another mother shared: “I referred to your book and it helped me in structuring the letter and finding words that describe my future daughter-in-law’s wonderful qualities.”

Words that will matter forever. That’s what these letters will provide.

If there’s a wedding in your future, please…leave nothing unsaid.

This post was initially published in March, 2017. And over the last two years, I’ve become even more convinced of the importance and impact of letters at this beautiful time!